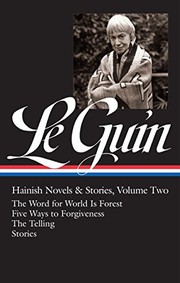 The star-spanning story of humanity's colonization of other planets, Ursula K. Le Guin's visionary Hainish novels and stories redrew the map of modern science fiction. This second volume in a definitive two-volume edition gathers Le Guin's final two Hainish novels, The Word for World Is Forest, in which Earth enslaves another planet to strip its natural resources, and The Telling, the harrowing story of a society which has suppressed its own cultural heritage. Rounding out the volume are seven short stories and the story suite Five Ways to Forgiveness, published here in full for the first time as the author intended. The endpaper features a full-color chart of the known worlds of Hainish descent.

"Genre cannot contain Ursula Le Guin: she is a genre in herself." —Zadie Smith